Fux-online offers comprehensive information on Johann Joseph Fux (ca. 1660–1741), the most important composer of the Austrian baroque. It provides texts about Fux and Fux research as well as additions to the scientific edition Johann Joseph Fux – Works. For chosen works, practical performance materials (parts) are made freely available at Fux-online. In addition, the website offers link-lists to digitized manuscripts, portraits and other editions. 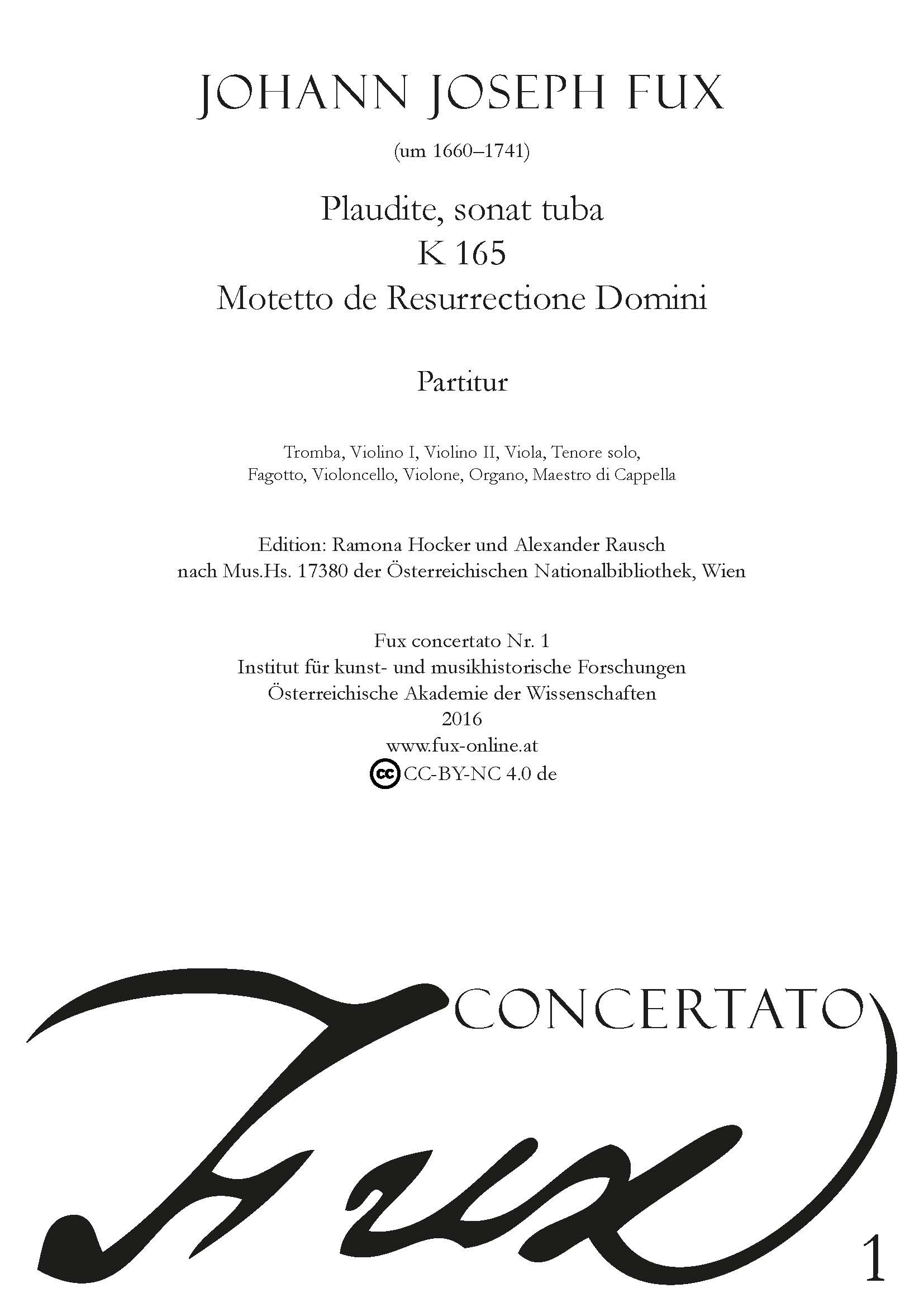 As a supplement to the edition Johann Joseph Fux - Werke published by Hollitzer, performance materials are made available as open access in the Fux concertato series. It includes material for volumes that have already been published (as in the case of Messe K 34a = volume 1 of the works edition) as well as editions specially prepared for music practice (as with the motet K 165, cf. the illustration). These result from collaborations with renowned festivals such as the styriarte or the Resonanzen as well as other performances. Works that for various reasons are not included in the printed series can appear online. As a rule, a conductor's score, parts and accompanying texts (music-historical introduction, critical report, song texts, etc.) are offered as PDFs.

Klagenfurt - Fux in the Cathedral 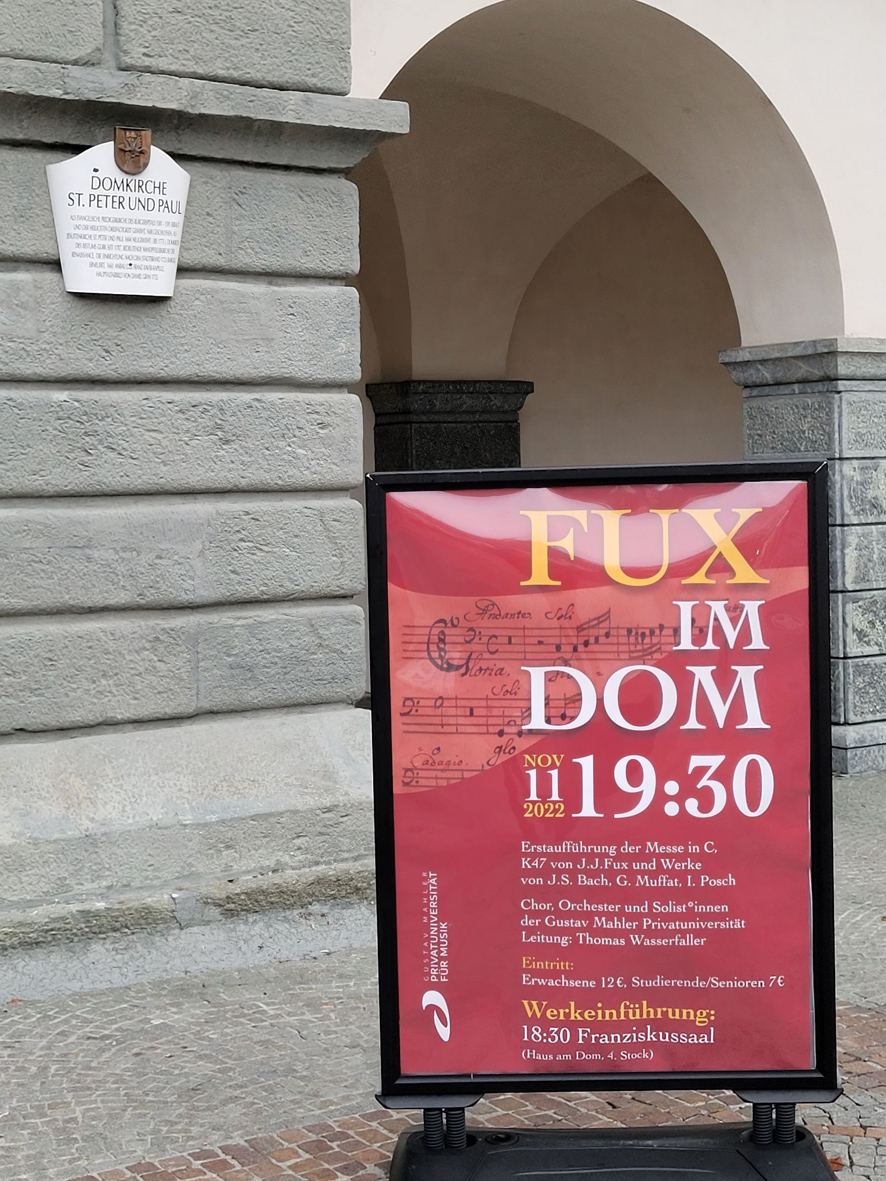 On November 11, 2022 a concert took place in the Klagenfurt Cathedral, in which Fux's Mass K 47 was the principal work. The performance was prepared by Ramona Hocker (Gustav Mahler Private University of Music) in the context of a seminar with students and realized by them under the direction of Cathedral conductor Thomas Wasserfaller.
The musical quality of the Mass in C major K 47 (in the festive style, with trumpets and timpani) is extraordinary, which is why the rehearsal for the modern first performance (since 1731) was worthwhile. This setting of the Ordinary is also interesting for Fux philology because two shorter movements exist as variants for the eight-part "Crucifixus," which have been preserved as autographs. The original parts are kept in the ÖNB (Mus.Hs.16118).
In addition to works by Georg Muffat, Isaac Posch and Johann Sebastian Bach, the trio sonata in G minor FuxWV III.1.24 (K 370) was also performed. This established a local reference, since this instrumental piece was already heard in Klagenfurt in 1728.
Follow-up performances for 2023 are already planned, the performance material of the Mass K 47 is to be published in the series Fux concertato (#8).

With the rediscovery of the Festa teatrale La corona d'Arianna, the fifth Fux Opera Festival of the styriarte 2022 became another success with the audience. In addition to the imaginative direction and costumes, the refreshing interpretation of the music, heard for the first time, contributed to this: as usual, professional and inspired conductor Alfredo Bernardini with the Ensemble Zefiro, the soloists and the Arnold Schoenberg Choir (rehearsal: Erwin Ortner).

The video of this production can be seen on the homepage of the styriarte.

Review of the Fux.Opernfest vol. 5

We are pleased that the work on the Fux edition and the development of Fux-online and the database are again receiving project funding from the City of Vienna, Kulturabteilung, Wissenschafts- und Forschungsförderung (MA 7). The new project mainly concerns the opera Costanza e fortezza and will start in October 2022.

In the series Klingende Forschung (published by the ACDH-CH and the Phonogrammarchiv of the ÖAW) CD No. 7 has been released: Plaudite! Musik von Fux, Telemann und Vivaldi with, among others, three works by Fux: the motet Plaudite, sonat tuba K 165, the Ave Regina caelorum K 208 and the Laetare turba caelitum E 80. The musical material and scientific documentation for all three pieces are available as open access in our series Fux concertato (nos. 1-3).

The ensemble Fiori armonici is conducted by Vladimir Prado, the soloists are Karoline Pilcz (soprano) and Lorin Wey (tenor).

The scholarly texts in the booklet were written by Alexander Rausch, Ramona Hocker and Elisabeth Hilscher.

Order from the publisher at OEAW: CD Plaudite 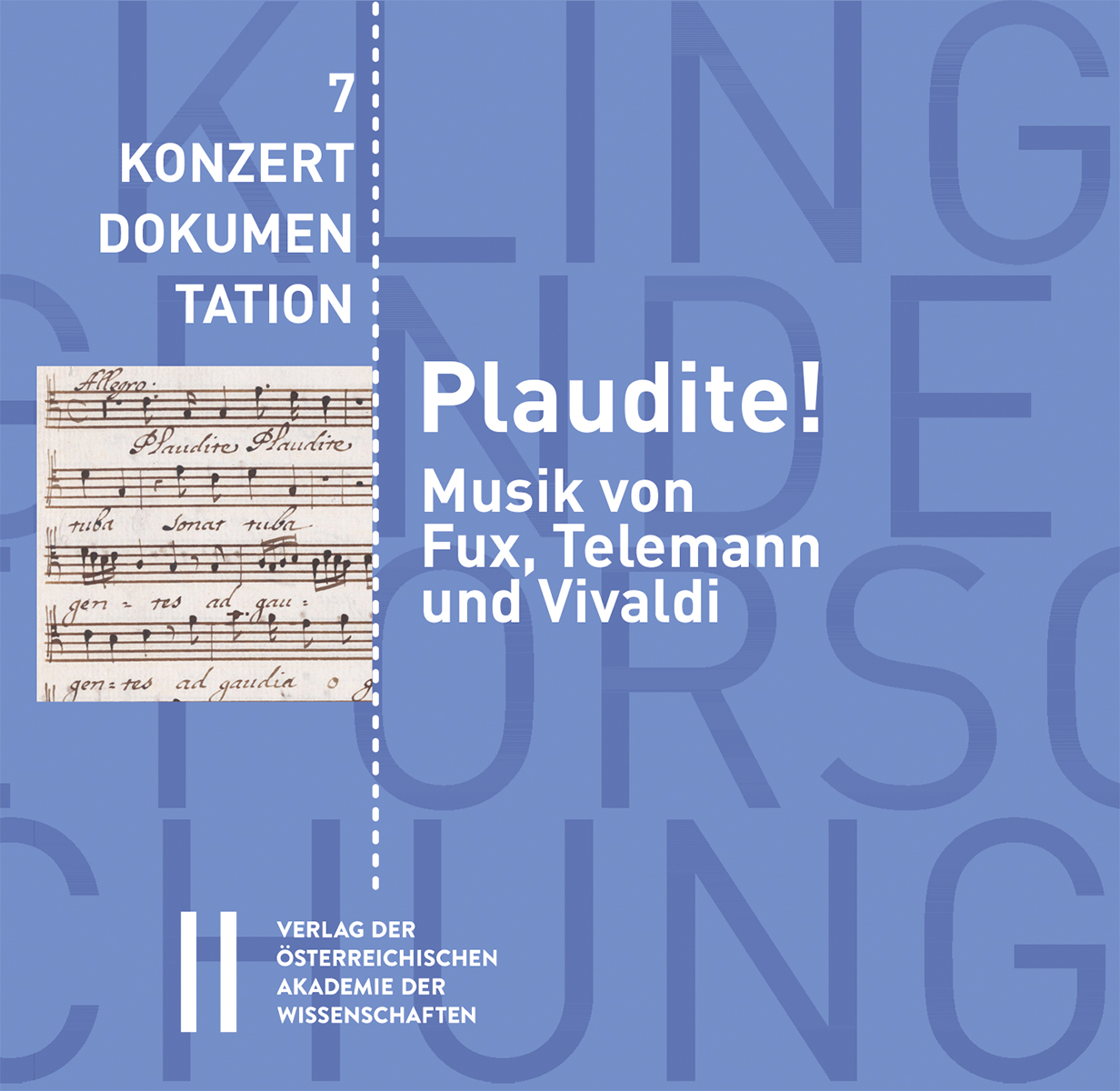 On 9 August 2021, 2:05 p.m. Ö1 broadcasts a concert of the styriarte (recorded on 10.7.2021 in the parish church of Stainz). Performed was the Dixit Dominus in G minor HWV 232 by Handel, the Magnificat in G minor RV 610 by Vivaldi and at the beginning the "Nisi Dominus" from the Vespers K 68 by Fux. The Arnold Schoenberg Choir under the direction of Jordi Savall appears. The musical material was prepared according to the source in the ÖNB as part of the ÖAW long-term project "J. J. Fux - Werke". 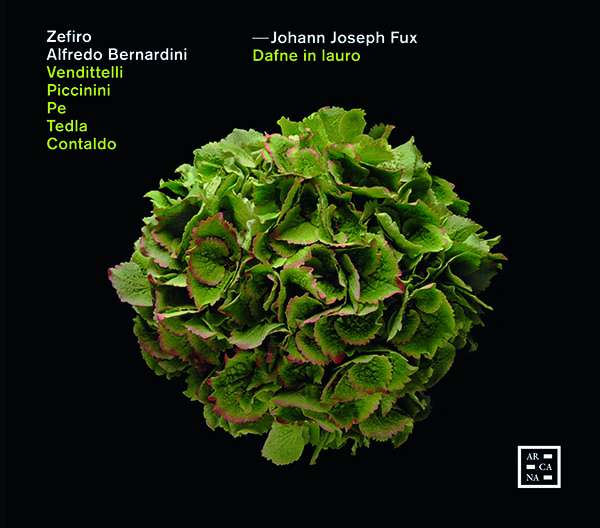 A new recording of the opera Dafne in lauro has been presented by Alfredo Bernardini and the Ensemble Zefiro. It is based on the 2019 styriarte production and offers a welcome addition to the older recording with René Clemencic. The score was compiled as part of the long term project "Fux" of the Austrian Academy of Sciences. 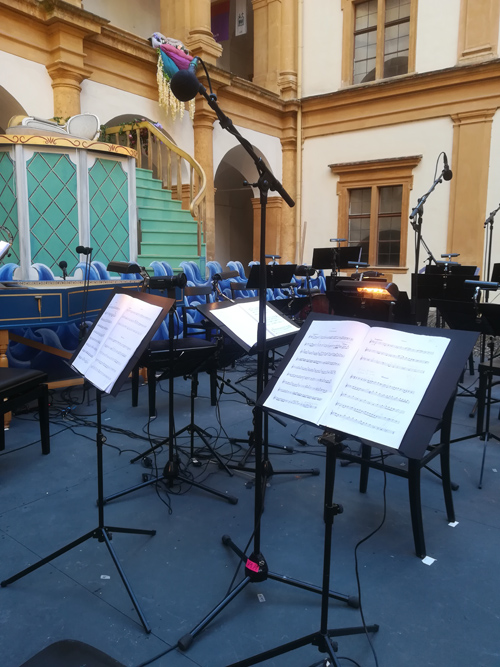 We are pleased that the work on the Fux edition and the development of Fux-online and the database are again receiving project funding from the City of Vienna, Kulturabteilung, Wissenschafts- und Forschungsförderung (MA 7). 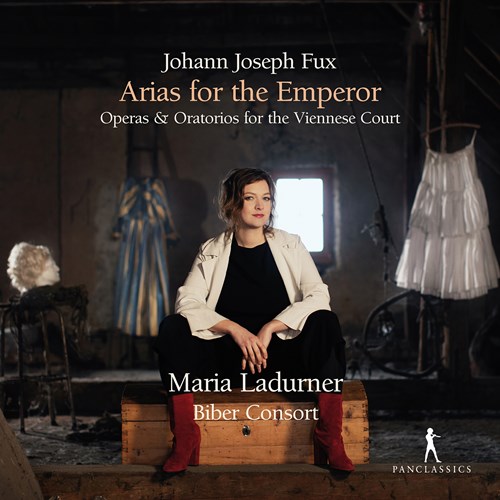 A CD recording with selected arias by Fux has been released, interpreted by Maria Ladurner (soprano). The arias are from better-known and partly still unpublished operas and oratorios by Fux, including Julo Acanio, Dafne in lauro, Giunone placata, Il Testamento, and La Deposizione. An interesting cross-section of the music-dramatic works of the court composer and chapelmaster.

A CD recording of the oratorio Gesù Cristo negato da Pietro with the ensemble Ars Antiqua Austria conducted by Gunar Letzbor has been released. The concert performance took place on January 24th, 2020 at the Vienna Konzerthaus as part of the Resonanzen Festival. This recording will be broadcast on   NDR   on March 29, 2021 (8:00-10:00 p.m.).
To this occasion, performance materials have been prepared, which will be published in the practice series Fux concertato. 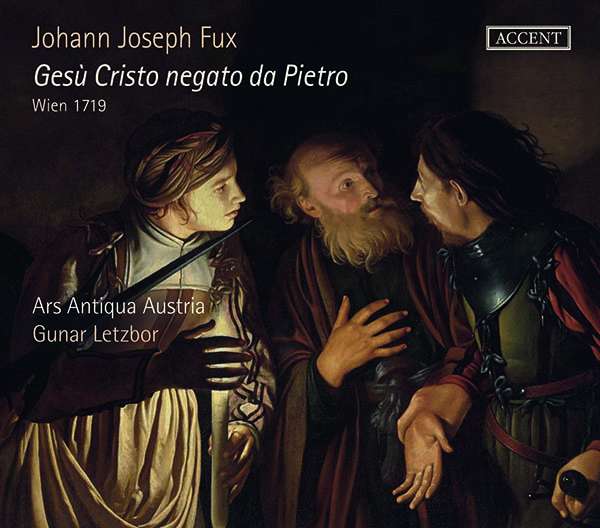 styriarte 2021
New release: "Dafne in lauro"
Postcript to styriarte 2020
Project funding from the City of Vienna

Older contributions from this category can be found in the archive and in the list with past events.

The contents of this portal are constantly being expanded. A database with a catalogue of works is in progress, which will enable a quick search for work numbers and titles. Relevant information for performance practice – such as keys, instrumentation and editions – is also recorded. A Fux bibliography is also successively built up along with the database, which can be used as a reference list until the searchable database is published.

For further information, comments and questions, please contact us at info[at]fux-online.at